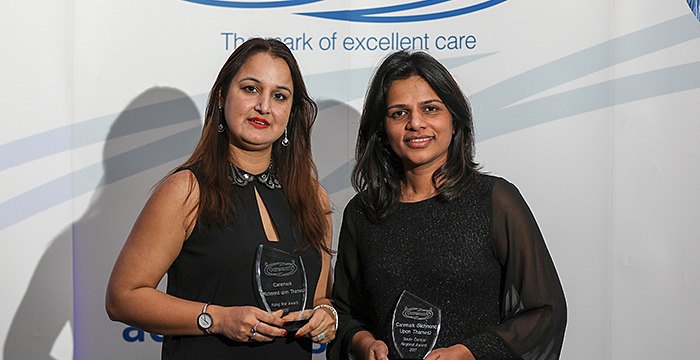 The power of two!

Young entrepreneurs, Shipra Mehta and Swati Bagwe are just two of Caremark’s thirty something clutch of franchisees who have recently joined the expanding UK network.

Shipra and Swati, friends and business partners, launched their Caremark home care business in Richmond-upon-Thames in January 2017 and started trading in May of that year. In less than 12th months they have gone from a standing start exceeding performance targets, to a business which is building a great reputation in their local community.

Their drive and determination to create a high quality locally based home care service was rewarded with two prestigious accolades from Caremark Limited at the company’s annual conference earlier this year: The Rising Star award and the regional award for top franchise in the south-central region, acknowledging their progress through the last year.

Both women come from professional backgrounds, with Shipra having worked in the NHS and Swati within Underwriting for a major insurance company.  Despite their different career paths, their common denominator is their shared vision to create an outstanding business, delivering bespoke care and support to the vulnerable people in their local area.

Their young business has already attained recognition from Richmond Council as a provider of home care as well as the council awarding one of their care workers with the Dignity in Care accolade.

The combined talents of both these young professionals is sure to stand them in good stead and will, no doubt, see them collect yet more gongs in the coming years.

With plans to extend their service to adults with learning disabilities, both Shipra and Swati are excited about their future and are looking forward to reaching out to different people in their community.

“I can certainly say, that now, a year on choosing a Caremark franchise has definitely been the best decision I have taken yet,” says Swati, a sentiment with which they both agree!
BACK TO NEWS